"Pike Peels Out" is the tenth and final[1] episode of the first season of Pike's Lagoon . It is the tenth episode overall. It premiered on July 22, 2019.

Pike likes eating banana peels, much to everyone else's disapproval.

Two bananas fall into the lagoon, Frilligan notices one and eats the banana while keeping the peel. Pike notices the other banana from underwater and grabs it.

Instead of eating the actual banana, Pike instead eats the peel. Pike tosses the actual banana away and it lands in Brooke's mouth. Brooke catches up to Pike underwater and tells her she'd be dead if the fruit wasn't so delicious, which just confuses Pike.

Frilligan attempts to pull the classic banana peel gag on an unsuspecting Sea Pumpkin, but Pike inadvertently saves him to ask if he was going to eat the peel. Sea Pumpkin tells her no and asks who even eats the peel.

Frilligan is annoyed that Pike ruined her prank. Pike is unaware that a prank was about to take place and attempts to eat yet another peel by tossing it into the water. The banana peel was instead caught by Frilligan who questions Pike's strange peel eating habit.

Suddenly, everyone nearby comes to ridicule Pike for her strange taste in food. Pike defends herself from the criticism when Cecile shows up with a banana on a fork, asking what everyone is ridiculing Pike for. End of episode. 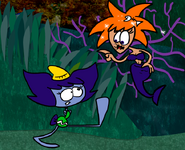 Brooke warning Pike about feeding her.

Animation error.
Add a photo to this gallery

Retrieved from "https://pikes-lagoon.fandom.com/wiki/Pike_Peels_Out_(?oldid=1068"
Community content is available under CC-BY-SA unless otherwise noted.